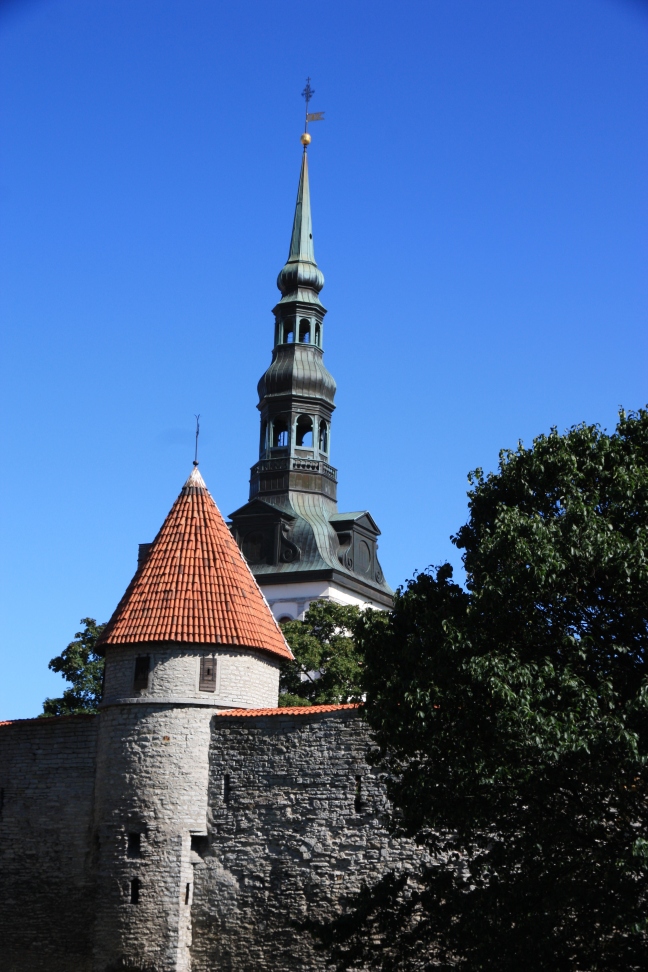 This week I have been attending and presenting at EECERA in Tallinn, Estonia.  Estonia itself is an amazing place that ‘fought’ for its democracy and independence through singing as a nation.  A pretty remarkable idea considering the ‘big stuff’ that is going on in the world today.  The power of the voice (verbal or non-verbal), of coming together is symbolic of solidarity and finding ways to dialogue with the other that isn’t always about the dominance of one idea over the other, or a right over a wrong, but rather as a way to question the assumptions we make in order to re-see ourselves anew.  Of course, as an artist I am interested in the ways in which children communicate and express what they know and think about the changing world.

Dr Kathy Ring (UK) presented on her longitudinal research exploring the language of drawing as a tool for thinking. Drawing in the early years is often valued as a precursory stage to writing that pays little attention to the role of drawing as a site of meaning -making for children.  Often educators prioritise learning environments in terms of keeping children busy, keeping them controlled and keeping them progressing in ways ‘we’ or curricula designs think are important.  However the children have other ideas!

Boys in particular she shared have a way of drawing that encapsulates action and movement, something that John Matthews explores too in his research.  Collaborative drawing offers boys or shy drawers a way in as does working on a grand scale.  How often do we simply put out reams and reams of A4 paper (even in different colours) because it is easy and cheap without considering the individualisation of the experience that this can create or the ‘workful’ and ‘unplayful’ experience that this can suggest.  A4 is small, unsuited for large, gross motor based elaboration, explosive movement or dynamic marks and can represent the media that adults use all the time to write upon.

Dr Ring also commented on the use of a large-scale drawing wall.  She observed how children’s enthusiasm for using it can wane after time (as with anything else) but warned against simply changing it because we thought children were uninterested.  It reminded me of many discussions I had over the past year where we rushed to change something in the environment because we perceived it needed changing or it had run its course.  She suggested leaving it out and don’t rush in with panic to change it because children often returned to things a few weeks afterwards but with a different mind set or way.

Dr Kathy Sylva (UK) presented on the effects of the EPPE project now that the children were teenagers and the effect that ‘Pre-school’ education has had upon their progression and attainment.  Profound reinforcement of the important role that parental involvement in their children’s learning has even just by reading to them, on a regular basis.  It twice increases the Pre-school effect on the outcomes for the child.  However what made interesting listening to me was that by simply going to a pre-school was not enough, what made the significant difference was going to an early years setting that had exceptional teaching and pedagogy defined by what EPPE would call Sustained Shared Thinking.

A good example of this was how she described good teaching as opposed to exceptional teaching methods.  Good teachers used words and encouraged the exploration of new vocabulary through engaging with children’s senses and exploratory drives.  Exceptional teaching engaged with processes of constructing understanding rather than simply increasing vocabulary.  Children’ s hypothesising was valued as a method for doing this, working with the big ideas of children and challenging assumptions. The lifting up of children’s theories was the main strategy identified and reminded me of how in one setting I work at the children began to wonder and question if water was alive or dead.  Did we work with idea enough though I now find myself wondering?

I was left thinking about what type of quality of education are we talking about and is this a shared vision of all and can it be?  I believe in my contexts that we are trying to construct a way of being with children that is:

A fabulous speaker followed up Kathy, Nandita Chaudhary from the University of Delhi, India.  Speaking about culture, she questioned how culture could be seen only as something that sits behinds us rather than something that guides our becoming too.

She made us all question our fundamental beliefs that we may take for granted in our contexts:  I.e. the unratified UN Convention on the Rights of the Child, of what education means in some contexts, of the role of the extended family in child care and indeed of the role of other children in the role of child care of siblings.  Is universality acceptable or right?  Is it possible in diversity to see ‘education and care’ as a singular representative model of best practice or are they always dependent on values, cultures and contexts that even in a country such as India are as diverse there as in the global context.

A moving story ended her presentation about Hanuman’s Ramayan (story) in which it reveals that it is not the storyteller (or researcher) that is important but rather the ‘story’ itself that remains as powerful and significant.  If you don’t know this ancient story then look it up!

After thinking I could cram no more into my head I went to Amy Pfeiler-Wunder and Christopher M. Schulze’s work about art in early childhood education.  Both American assistant professors they talked about the role that drawing played in children’s lives.  Amy explored the culture of the Art room through a lens of class and specifically the concept of money.  She explored the ways in which two children from different backgrounds revealed their values of class and culture through their drawings.  Whilst Christopher examined a single episode of two children’s drawing interaction using Deleuze and Guttari’s theoretical framework of desire and political immediacy.  Both presentations reminded me of how children communicate what is important to them in multimodal ways, often so complex that we as educators fail to notice them and also in the how children can be ‘culturally groomed’ in terms of the exposure of art forms they are enabled to see even by well meaning educators.  Our choices therefore are not value, context or culturally free but mediated through the ‘power’ of the educator.

In both these presentations I was reminded about the difference and interrelationship between the how and the why.  We need to understand how children enter into graphic representation in order to perceive why they might be doing so at all.  I can’t pretend to understand all the concepts explored in these presentations but it has created an appetite to reengage with Delueze and Guttari and the work of some Swedish researchers who also deconstruct children’s experiences using similar theoretical frameworks.

Pen Green in my home country was up next.  They are particularly fascinated by how we can make children’s learning visible and in how video can help educators reflect upon their own pedagogic strategies.  In Reggio Emilia, Italy we are continually confronted with a rich and strong image of the child.  In their research they ask of educators, what their image of the child is and to describe it in words and concepts?  Then they challenge the educators to go back into their settings to capture in video what their image is.  It encourages a polyvocal ethnographic approach that questions how their personal values are represented in their settings through assessment practices, visible display, pedagogy and environments.

Although the reflection enabled analysis on the relationship of teaching and learning within personal framings of the concept of ‘childhood’ they reminded the audience that what they were doing was not of the ideal of working towards a model of ‘best practice’ but rather ‘wise practice’ that is about fluidity and doing the right thing in the moment rather than feeling like best practice is an achievable and therefore end and still goal.  The idea always being about uncovering what is within, around and in relationship to the child and not to simply just cover the curriculum.

St Thomas Centre in Birmingham shared their work in this area.  Sue Bennett’s research was rooted in the effects and affects of leadership change and that it wasn’t enough to have a view on what should be happening, but to consult with others on what their views are before you can as leader move forward with new proposals.  You have to unpick the now before moving to the possible future.

Change itself is a messy process, as I well know and it isn’t possible without the mess and fall out (Fullan, 2001).  However, change is a gamble that has to be taken in order to survive and thrive (Halton and Doyle).  Being stuck in the past historic memory will not help but change has to be done with people, within their contexts and cultures and not done to them.

So much I listened to…

Fran Paffard (UK) is undertaking her doctorate at University of East London and is exploring the multimodal illiteracies of 2 year olds.  She is questioning the meaning of multi-modality and literacy. The current focus in the UK on 2 yr olds holds an inherent danger that we view this age band as a continual remedial state or as ‘tricky people’ because the funding for education is not universal but targeted towards disadvantage.  It reminded me of something they said in Reggio Emilia in February that children sometimes are ‘vulnerable’ but not weak.

Literacy, she described was a contested concept.  Was it about reading and writing, or meaning-making, or communication, expression and the making of relationships?  And where do we site learning, does learning happen in the child, outside of the child or both?

Pahl (1999) said “…all children’s writing, drawing, play and symbolism is shaped by the context in which they are produced and that this then shapes the form of the sign.”  So again, connecting back to our choices as creators of children’s learning contexts our decisions are not value, context or culturally free but mediated through our experiences and the experiences that the child brings to ‘school’.

Something I have become increasingly interested in my own research is the idea of Malaguzzi’s 100 Languages and the connection with Multi-Modality.  Kress (1999) would say that multi-modality IS the way in which children engage with, make meaning and express what they know about the world.  Certainly children with different expressive languages and materials that are to hand use them singularly or together with others to express and make-meaning.  But are children going from mode to mode, and combining them as a way of finding out which are the best, which communicate their ideas in better ways?  Kress (1999, p.29) advocates that we should encourage children’s translations between modes and one thing that is whirring in my mind currently that questions this is how does this enable children to traverse the recalling of known knowledge and move towards the co-construction of new knowledge (the subject of my paper that I presented).

It certainly has been a wonderful conference and given me much to think about.  I need to go back and re-read Kress, Dyson and Pahl on (Multi-Modality), Bateson (Connections, Patterns and Relationships), Deleuze and Guttari and Mariet Olsson (Desire, Assemblage, Political Intimacy, Becoming) and also Lenz Taguchi (Intra-Active pedagogies).  The work begins now I guess!!!

One thought on “Values, Culture and Contexts of Education Reflections on the 23rd EECERA Conference in Tallinn, Estonia (Summer 2013)”