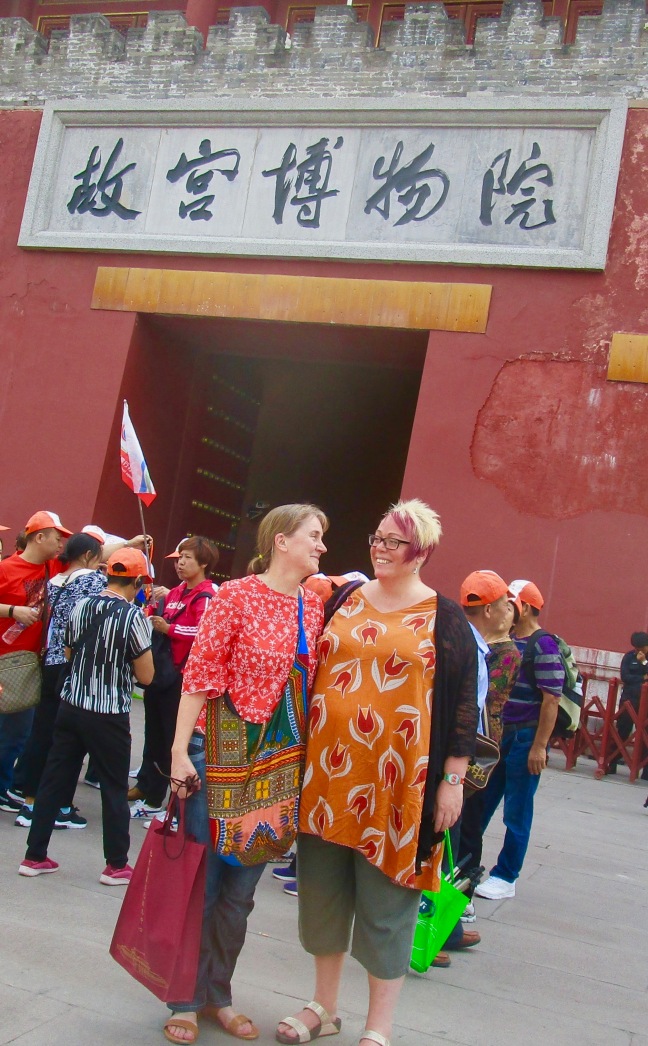 It was my absolute pleasure and honour to be asked to prepare and present in this 2 day weekend workshop hosted by the International School of Beijing (ISB) with the passionate and dedicated Louise Lowings, who is the Head Teacher of the internationally known Madeley Nursery School in Telford, UK which is one of the schools in the West Midlands where I live and work. Together we lead a group of 60 delegates in a journey of exploring and understanding the meaning-making and communicative strategies of children’s drawings.

We were keen to unpick the processes behind children’s drawings done both in group learning contexts and spontaneous and individual moments.   We considered the role of drawing as a mode of children’s research in the way in which they investigated the affordances of both the materials and the surfaces that received the marks; the narration that accompanied the drawing; and the theories that children were exploring when constructing and communicating knowledge about the world.  We acknowledged that children’s drawing was sensitive to the vitality of life, were deeply complex and rich in meaning and that originated in the world of aesthetics where children sought beauty, balance and harmony in the composition of their drawings.  It was important for us to underline what John Matthews states in his book (2003) “Drawing and Painting:  Children and Visual Representation” that drawing was the basis for all thinking and closely linked to subjects and disciplines beyond those traditionally associated with the arts.

On day one, I began with a theoretical underpinning that challenged the way in which drawing was seen as a developmental model beginning with a meaningless scribbling stage that developed through fortuitous mistakes that were developed over time until visual realism was achieved.  This is a deficit model in which to see children’s drawings operating within as it is based only upon western fine art traditions and lacks the emotional, social and individual and group contexts of experience that children exist within.   Contemporary research places drawing at the heart of meaning-making and sets it within the social context in which the sharing and exchange of ideas occurs.  Processes of map making, theory drawing, the role of the educator and visual thinking were also considered during this time.

After a discussion on drawings participants had brought with them, next up was Louise Lowings, sharing an example of group inquiry based work from Madeley Nursery School.  It focused around a group of children aged 3-4 years old who were displaying an interest in the woodlice they found in the garden.  This inquiry saw the children of this particular learning group evolve their own ideas and theories about ladders, lifts, boats and special lights that were needed by the community of woodlice they had found.  Drawing here was a modality that sat within a context of other languages of expression such as paint, clay and construction.  Drawings in this inquiry were both researchful and inventive and full of vitality of learning and expression.  As Loris Malaguzzi wrote; “In fact, drawing, painting (and the use of all languages) are experiences and explorations of life, of the senses and of meanings. They are expressions of urgency, desires, reassurance, research, hypotheses, readjustments, constructions, and inventions.”  (Loris Malaguzzi, 1988)

Their work on the subject was both beautiful and complex and revealed the strong need of educators to carefully, pedagogically document the unfolding experiences of the group of children.  It was not enough just to focus on the drawings themselves but on the connections they made in talk, in action, through the use of other languages of expression and in their playful encounters of real woodlice that the flow of children’s thinking in a context of inquiry was made visible.

In the afternoon, both of us lead workshops on unusual/unexpected drawing media and theory drawings.  These enabled educators to experiment and explore for themselves the mark-making possibilities of media and encouraged their own sense of critical thinking as they bounced ideas off each other in small groups when they thought how magnets worked.  They were then encouraged to draw their theories out, negotiating the form and shape and use of colour of their graphic explanations that used both skills of imagination and logic simultaneously. 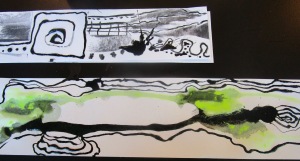 Day Two began with me sharing work on the pivotal role between graphical instruments and the surfaces that received their marks.  I also shared various, generative contexts where children’s graphicacy could be explored within a frame of inquiry.  Lou Lowings shared a fabulous project on the graphical development of snail drawings from Madeley Nursery that occurred last year. We not only thought about the place of graphics in inquiry based work but considered too what inquiry itself looked like with children in ECE.   We also shared our thoughts on working with young children aged 1-3 and in contexts where children didn’t share a language between them or who didn’t share a language with the educators in their schools.

In the afternoon a whole workshop focused on the relationships of colour.  This was a workshop that really exceeded any expectations that we had and where the unexpected was found to be rich and vibrant.  Educators were invited to create a series of hues of red where we suggested the names such as lip red, Beijing red, rose red…  We also provoked them to create a series of blue swatches, each different and asked for them to be named.  Memories, story telling, humour, iconography, symbolism and emotion were all displayed as participants negotiated and contested each others point of view on colour making.  Subjectivity and hearing of differing perspectives was rich.  It reminded us that there is no singular truth in the process of inquiry, only possibilities.  Maybe it was the sun and the beautiful clean air that made it all seem extra special too.

Once again, a big, big thank you to the team at ISB, Karen,  Sherryl,  Jesse and OOL, who made this all happen and to EARCOS for funding it. It was truly an honour and we hope that in the future  we can share more about children’s creativity, their thinking and processes of inquiry in the near future.  For further information, please contact Debi at debikeytehartland@mac.com